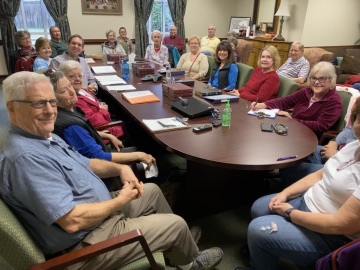 “The book of Acts tells the story of the early Christian church with all the flair of an exciting adventure novel.”

Every Tuesday at 4 pm we will be studying the Book of Acts. All are invited to join us in the Fellowship Hall for this study. We began last week and had about 40 participants! Some are pictured above, although we couldn’t capture the whole room in one picture.

The book of Acts tells the story of how the early church was formed. It was written by Luke, although Luke was not one of the original 12 disciples. Instead, Luke (who also wrote the Gospel of Luke) wrote Acts as a bit of a research project in order to learn all he could about Jesus. Luke also traveled on several missionary journeys with Paul.

This afternoon we will study Acts 2. Here are the highlights you can look forward to:

Have you ever wondered what the Holy Spirit is, and if it still has an impact on our lives today?

We will explore why God sent the Holy Spirit to the early church and how it continues to profoundly influence our church today.

Acts 2 gives us a unique glimpse into what the church looked like in the 1st century, just decades after Christ. We will explore the ways Unity is similar, and different, from the early church.

Bailey Beam, our Director of Children’s Ministry, is offering a Bible experience for kids during this time. Kids can be dropped off in the nursery area.

I am copying the Introduction to the Book of Acts below so that you can catch up if you missed last week.

See you on Sunday (and maybe this afternoon!)

Introduction to the Book of Acts

Luke was a doctor and an early follower of Christ (although not one of the 12 disciples).

Luke also wrote the gospel of Luke (the third gospel in the New Testament). Acts is a continuation of the story told in Luke.

Luke was known to travel with Paul on some of his missionary journeys. You will notice later in the book of Acts that Luke switches from “they/them” language to “we/us” language.

Luke, the beloved doctor, sends his greetings, and so does Demas.

Timothy, please come as soon as you can. Demas has deserted me because he loves the things of this life and has gone to Thessalonica. Crescens has gone to Galatia, and Titus has gone to Dalmatia. Only Luke is with me. Bring Mark with you when you come, for he will be helpful to me in my ministry.

Acts is the historical account of the growth of the early Christian church.

Acts is concerned with telling a theological history about the birth of the church.
Luke’s Audience

Luke addresses both of his volumes to Theophilus. Who is Theophilus?

Jesus appears several times to groups of disciples during the 40 days between his resurrection and ascension. A full list of Jesus’ appearances is found in 1 Corinthians 15:5-7.

1:14: Expansion of the inner circle to include women and Jesus’ brothers.